Write faster, better and stronger while reducing the stress and frustration that comes from too much planning.

Planning your story is good. In fact, it’s downright smart! However, there is such a thing as too much planning. Constructing your plot and building your characters in advance can only be helpful if what you’ve created is manageable. The trick is to figure out a comfortable in between.

When you create your characters, only write the basics and use pictures as often as you can to avoid becoming lazy later on. Sometimes, even for a writer, it’s easier to look at a picture than it is to read over several pages of notes.

As you construct your plot, do so in three stages.

Think about what your characters are trying to accomplish in your story. This is the main idea. Think about it and write it down. Remember that the main idea doesn’t have to be profound or detailed. For example, your main character wants to find love or something as simple as trying to find a lost lucky sock. When you’ve done that, stop thinking of the entire story. Instead, it’s better to think of it in segments.

Every chapter is different and should have its own events and occurrences and problems. Think of it like a mini story, rather than a chapter. When I write, I find it easiest to think of what I’m writing like it’s a television series, where every chapter is an episode and every season (or series) is the book as a whole.

If you really think about it, all television shows are built exactly like a book. There’s a main idea that the characters are chasing after throughout the entire book, or season, while in every chapter, or episode, they have to deal with different events and obstacles in order to achieve the ultimate goal! It’s exciting, right? Sometimes you don’t even realize the main idea until the very end of the story, which gives the viewers or readers that major “wow!” moment, where they’re either slapping their palms to their face or just completely blown away.

Using the “lucky lost sock” idea from above, I’m going to construct a quick plot that’s easy to follow and stick with so that you can get an idea of a simple, no fuss plot. 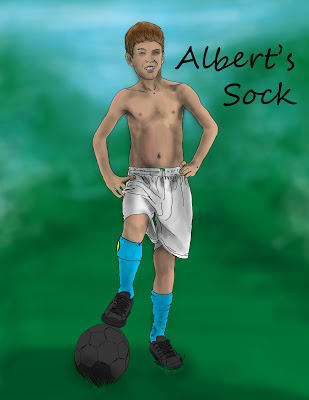 It’s the start of a new soccer season and superstitious Albert can’t win without his lucky sock, but it’s nowhere to be found—the search begins!

Soccer tryouts begin, and Albert still can’t find his sock. He’s new to this school and wants to make a good impression, but without his sock he knows he’ll never make it. He flunks out during tryouts. However, the event wasn’t a total loss. He met Sean, who agrees to help him find his sock.

Sean takes pity on Albert, and because he’s known the coach for a while, manages to get Albert a second shot to get on the team. The tryouts are set in one week, but all Albert can think about is finding his lucky sock. He fears he left the sock at his old house, which is in another city more than 100 miles away, and decides to go back to get it.

After double-checking everywhere Albert can think to look, he begins to plan the trip back to his old house. Sean knows this is a bad idea, but he lets Albert convince him to tag along. The construct a promising plan and prepare to leave after school the following day.

Chapter 5: The Hitchhikers Guide to Stupid

Part of Albert’s plan was to hitchhike to the train station to help save money, and although Sean didn’t like this idea one bit, he went along with it because he didn’t want Albert to go alone. When someone finally stops for them, it quickly becomes apparent that the guy wants payment for his services—and it’s not money!

The boys manage to get out of the vehicle before anything bad happens and sneak back home to grab their bikes. Better yet, when they finally made it to the train station, they were able to bring their bikes with them on the train. On the train ride over, the boys fall asleep next to each other, which is when Albert realizes his feelings toward Sean might be a bit more complicated than he was aware of.

By the time the boys arrive in Albert’s old stomping ground, Albert’s confused and feels the need to figure out what he’s feeling. To do this, he tries to extend their stay by leading Sean in all the wrong directions. When Sean realizes what’s happening, Albert says he just wanted to show him around.

Chapter 8: A Night Under the Stars

Sean is on to Albert, but he’s not ready to let Albert know yet. After all of his detours and delays the boys hadn’t made it to Albert’s old house, so they had to camp out in the park. Although they weren’t prepared for this, they soon figure out how to keep each other warm.

Chapter 9: A Waste of Time

The next morning the boys make it to Albert’s old house, but it’s too late. Someone else has already moved in. They tried knocking on the door but no one was home, so after a few hours of moping around, Albert decides to sneak in through the basement window, which he knows never locks properly.

The boys construct the perfect plan and slip into the house undetected. They even manage to search the house without getting caught. As Sean begins to lose all hope of ever finding Albert’s lucky sock, Albert finds it in the attic—but he doesn’t tell Sean. When he finally finds the sock, Albert realizes that it wasn’t the sock he was looking for; it was love.

By keeping your chapter summaries short, they’re easier to follow and less of a struggle to change if you’re struck by inspiration later on. So give it a shot, keep it simple, and happy writing!