Do you remember, as a child, how you’d gather all of your G.I. Joes and army men and cars and head out to the backyard for battle?  Or how about the times you’d spend hours building a base out of sticks or books or even mud!  Ah, yes.  Those were the days.  The days when stories always came together in the blink of an eye, the days when a plot formed without a single brain fart, and the times when creating something was done simply for the fun of it?

Why did you stop?

If you think about it, building forts and playing with toys is the best way to plan a story.  It’s simple, it’s distracting and it’s super fun.  Of course, I get it.  You’re not a kid anymore, and you’re concerned about what others might think… but why?

Sure, if people found out, they’d think you’re a nut, ripe for the loony bin.  But so what?  Isn’t that what we dreamed about as children?  Growing up so that we could do whatever we want and not have to worry what others thought?  What happened?

Grab yourself a nephew, a younger cousin, or brother, if you have to.  Just play a game and let loose.  You’ll be surprised at the amount of new ideas you’ll come up with after a good game of men.

I’m not afraid to admit it.  I’m 29 years old and still break out the G.I. Joes from time to time.  Of course, the games I play these days are much more structured, and they’d probably bore the pants off of your average, sugar-fuelled child.  I tend to build and take notes.  The objective isn’t to rekindle your inner child, it’s to clear your mind and let the ideas come to you, which is far easier, and much less painful, than pounding your head against a keyboard.

Start by building your ‘headquarters’.  Grab some old books or cardboard boxes and shape a house or building or fort or… whatever else will set the stage for your game of men.  Then grab a few army men, or even sculpt them out of modelling clay or cardboard cut-out, and give them some names and ages.

You don’t need to have a direction.  It’s a game.  Just go with whatever comes to mind and after a while you’ll be having a blast, relieving some stress and brewing one hell of a nostalgic moment.  Even if you don’t come away from the game with a few new ideas, you’ve helped sidetrack your thoughts to something mundane and given your head a moment to recover from the day-to-day grunge of adulthood. 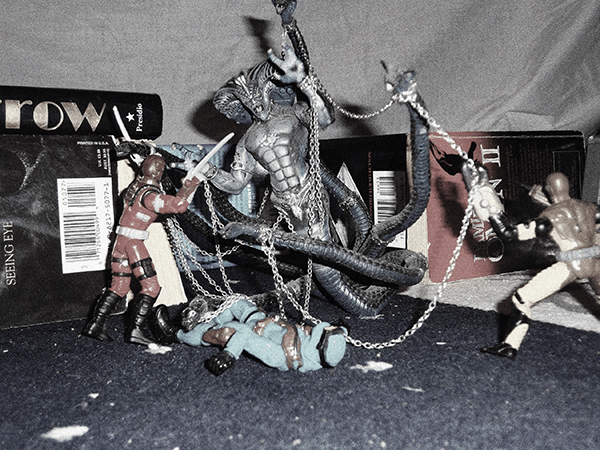 Lather, rinse and repeat.  Don’t just try this out once and give up.  Try it out a few times throughout the week.  You have nothing to lose and everything to gain, and we’ve already learned that quitting is for quitters, cheaters never prosper and don’t eat sweets before dinner because it’ll ruin your appetite.  Put aside whatever apprehension or doubt you’re carrying on your shoulders and unleash your imagination.

And if you do give this a whirl, take a few snaps of your creations and games and send them in!  I’m sure I’m not alone when I say I’d love to see your creations.