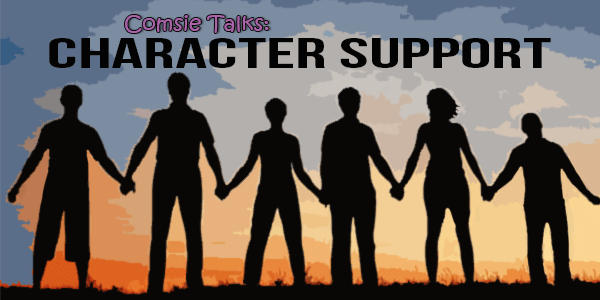 To write a love story, you would think that the typical ‘boy-meets-boy’ formula would only involve two people. Main character. Love interest. Period. And if you’re telling a short story from beginning to end, sometimes simplicity is the key to creating a great piece of fiction. However, for those of you out there who have plans for something a bit more extended, an ongoing series or a longer novel or novella length story… it’s always great to have a little bit of character support.

What is character support? That’s when you include a few other characters besides the main boys involved in the meat of the story. These supporting cast members can come in the form of a best friend, a sibling, a mortal enemy, a wise teacher, a love rival, some comic relief… and pretty much anything else you can think of. Naturally, you don’t want to add TOO many supporting characters, as the storyline can quickly become complicated and confusing if you pollute it with too many people unnecessarily. But having a few extras on the sidelines couldn’t hurt.

The reason that I, personally, love having supporting characters in almost all of my stories is because I think they help to add depth and meaning to the two protagonists that I’m writing about. The purpose of using supporting characters is to act as a catalyst to get the story to move forward in the direction you want it to go, while allowing your readers to learn more about the people falling in love.

For example, in the story “Jesse-101: Online Celebrity”, the main story is about Tristan falling for Jesse after seeing his videos on YouTube. Now, I could certainly tell that story by having Tristan just have a running monologue in his head at all times. His thoughts and concerns and fears… it can be done. But, had I written it that way, I think it would have gotten boring rather quickly. The idea of having other people around him, interacting with him, sharing dialogue with him… is to introduce your readers to different aspects of the main character’s personality, and to define their motivations in the plot. They guide the story. So, instead of having Tristan talk to himself for ten pages straight to explain his shyness and his worries and his doubts, he has his best friends, Lori and Michelle, to have those conversations with him. It’s a fun way to deliver the same amount of necessary information for your plot to work, and you don’t sound like you’re giving a lecture on what’s happening. Tristan’s friends push him, they laugh with him, they comfort him. They allow Tristan’s character to expose himself to the audience as he exposes himself to his supporters. He gets to show what kind of person he is, not by saying ‘I’m this kind of person’, but through his actions and his dialogue. His ex-boyfriend plays a part in telling the readers what his personal history and limited experience was like the first time he supposedly ‘fell in love’. It helps to explain why he’s so insecure about the idea of going out there and trying again, or why he thinks that some things are just too good to be true. Artie plays a role in telling a bit more about Jesse’s character by the way they play off of each other, Scotty plays a role in bringing out another side of Tristan that the other characters can’t. And Tristan’s mother brings up the issue of Tristan’s sexuality, and how he feels about having that secret exposed. Everyone is there for a reason, and I know that I can use those characters to comfortably mold the story into what I want or need it to be at any given moment. It’s still all about the protagonist’s growth and development, but they’re there to help things as smooth and as interesting as possible.

In some of my other stories, you’ll find an entire host of side characters that, if you look closely, are often there to have the kind of conversations and put the main characters into the situations that they need to be in in order for the story to take shape. “New Kid In School” wouldn’t be the same without Tyler or Ariel or Hailey being added into the mix. “A Class By Himself” took on a whole new direction when the ‘Chris’ character was added, and later on with Joel. If you read “Gone From Daylight”, every character that Justin spends time with has a different effect on him in the story. His interactions with Taryn are vastly different from the ones he has with Trevor. And those interactions are different than the ones he has with Gyro, or Dion, or Jenna, or Zero. By having these characters added to your story, you’ve now been given a bonus opportunity to present a more well-rounded, three dimensional, image of who your main characters are and what they’re feeling. And in a more entertaining way than just writing it out. If your character has a tortured past…instead of writing, ‘he had a tortured past’… use one of your supporting characters to ask them about it. Let them talk. Use that dialogue as a clever way to explain what’s going on without making it look and feel like a high school book report.

Sometimes, when you’re writing… you’ve got to be sneaky! Hehehe!

Get these other characters involved. Let your readers learn more about the characters along with their supporting cast. Let them be included in the process of getting to know them like a close friend would. That can be the difference between telling a story, and showing a story. Keep them engaged as often as possible.

How do you do this? I definitely don’t want you guys to force an extra character into your story if you don’t think they need to be there. But if you decide to go this route… it’s not hard at all.

Take a moment and think about the people in your life. However often or not often. Think about who you are when you’re around them. And think about how different those relationships are from one another. You might act one way when you’re around a boy that you secretly have a crush on, and another way when you’re hanging out with your best friends from high school or college. You’re one way when you’re with your parents, and another when you’re around your co-workers or classmates. You still have a central personality that is uniquely yours, something that you can call ‘home base’… but the people around you bring out different aspects of that home base personality, based on who they are and what your relationship with them is like. When adding supporting characters to a story, the concept is no different. You know who you can laugh and joke around with, who annoys you, who you can be foul mouthed or playfully vulgar with, and who you can lean on if you need help or an understanding ear. Whatever it is about your main character that you decide you want to add to the story, try finding someone that can appeal to that side of them and have them get together. Someone to inspire them, or scare them, or get them angry, or make them jealous. Whatever. Show your readers who this person is through their deeds other than your prose alone.

Voila! Your supporting cast is on deck and ready for work, Captain!

Take your time and practice so you can get used to using a supporting cast effectively. ALWAYS PRACTICE! Develop an instinct for it. Trust me, it’ll come. Just a little something to keep in the back of your mind.

This has been ‘Comsie Talks’! And I hope this helps! Happy writing! 🙂