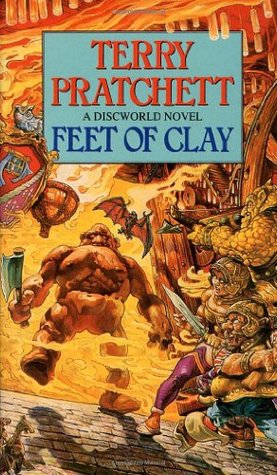 If you’ve never read a Terry Pratchett book, you need to rectify that mistake immediately. Terry Pratchett is a legend in the field of fantasy writing. He has written approximately 40 books set in the “Discworld” universe, but sadly died early this year due to Alzheimer’s.

First thing to know: The Discworld novels are fantasy (as you’d expect in a world that is literally a disc, supported on four elephants, on top of a giant turtle floating through space). But not serious fantasy – fun fantasy, that pokes fun at all the clichés of the genre.

Second thing to know: The Discworld novels feature a sprawling cast of recurring characters, but the central protagonists change from book to book; the central character of one book might turn up in a cameo appearance or a supporting role in another. So within the 40 odd books, there are informal sub-series focusing on particular groups like the wizards at the Unseen University, the Anhk-Morpork City Watch, or the witches led by Granny Weatherwax.

The third thing to know is that even though the novels are comic fantasy, Pratchett infuses the books with a lot of subtle but insightful social commentary, and over the course of the novel, Anhk-Morpork evolves from a somewhat anarchic state to a more organised, even inclusive society. That inclusiveness comes out quite strongly in the book I chose to represent the Discworld novels – “Feet of Clay”.

“Feet of Clay” isn’t the first Discworld novel, or even the first book to prominently feature the City Watch, but it’s one I found myself re-reading again and again, and makes a good book to jump into the series.

Sam Vimes is a no-nonsense copper supervising the increasingly diverse City Watch which includes trolls, vampires, Igors, a human raised by dwarves and a werewolf. He has a crime to solve (the book doubles as a “whodunnit?”) and golems are involved.

The golems are a neat creation: creatures formed of clay that obey instructions written on paper, and inserted into their heads. Since they don’t need sleep, or food, and are virtually indestructible, they’re treated essentially as robotic slave labour by the population at large. But maybe the golems aspire to a bit more than that…

My favourite scene of the book is when Dorfl, one of the golems, is accosted by various priests keen to recruit him into their religion. When he questions why he should believe in their particular god, one of the priests summons a bolt of lightning… which doesn’t have much effect on Dorfl. The priests are quite flummoxed at having to make their case via evidence and strong arguments, rather than smitings from the heavens.

While some of the Discworld novels are stronger than others, this one and many others are definitely worth the investment of your time. Recommended.