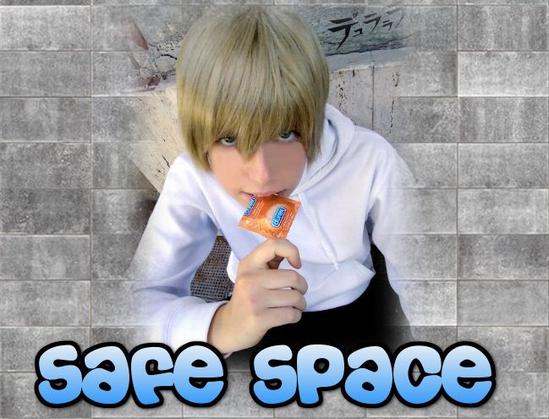 SAFETY!!! We’ve all been taught that being sexually guarded is the way to go, right? That we need to be careful? That condoms were a must, as well as choosing partners that we knew well enough to not wiggle our way into a potentially nasty situation. Maybe even a DEADLY situation.

However…sex is a ‘thing’. we all have moments of feeling invincible, and common sense doesn’t always work in the midst of the spontaneity and the heat of the moment. So I wanted to ask you guys…

Can you say that you’ve ALWAYS been safe in your sexual experiences? Should you have? Do you have any regrets or luckily dodged any bullets concerning your sexual safety? What caused you to do it? Would you take it back if you had the chance? It only takes ONE mistake, after all, to alter the rest of your natural life. Just one.

Give us your tales of condoms, safe sex, or lack there of. It’s a discussion that a lot of people need to have, but it can be embarrassing for a lot of younger guys to talk about. Let’s have the discussion for them instead. K?

Tell us about your experiences buying, using, not using, condoms or other forms of protection while exploring yourself sexually…

Sorry to bore ya but I haven’t had any legitimate sexual encounter ya know… BUT I did buy a pack once. It was one of those durex “ultra thin” variety. So I tried them while “In the Process” one time and found them quite uncomfortable hehe, they’e tighter than they look hehehe, and it felt too small :/

So there. No real sex yet. Still a virgin :P” – MasterM

“I was heavily addicted to drugs during my teenage years…

“I have very rarely used condoms I suppose mainly because the need for them is so infrequent that I always expected them to go out of date Hehe, I was definitely pushing my luck back in the mid to late 80s when HIV/AIDS was all over the news all the time, I just told myself that I was safe and the guy I was sleeping with had been my best friend since we were 7 years old so he must be safe plus he hated condoms (No excuse!). It wasn’t until well after we split up that I found out he had slept with at least 15 other people while we were together, so I definitely dodged a bullet there.
If i met anyone now i would use protection as i finally grasped the fact that i am not invincible Hehehe!” – Tricky71

Girlwise is a different thing. Girls I went with at school it was mostly the pullout method because sex with girls was most times spontaneous.. Getting a girl pregnant was taboo and really disgustingly selfish a cool kid wouldn’t do it you’re talking about maybe a child’s life. Girls that got pregnant didn’t always have an easy time often got the slag label especially if she slept around and the guy was often made outcast even though he was so proud of himself. As I got older it was either trusting a girl when she said she was on the pill or wearing a rubber. I didn’t come across any that lied about the pill like why would they but times like at a party I thought maybe I should be careful if I was sane enough to think it lol which wasn’t often because I was tripping on something.

Sad to say but younger kids have to real careful until they find a permanent guy or girl. I was lucky I didn’t catch anything with guys and I didn’t get a girl pregnant but it could have been another story. – Sam

“I had a french friend staying first time i bought some…

Pierre was 14 and I was 15, and we bought them for a dare. I say bought them, we got them out of a vending machine but we still were hesitant because of anyone coming in the toilets and saw us.

After that um, while at boarding school, I didn’t use any or have access to them, so am fortunate nothing was caught. Then again at that age back then at a boarding school it would of been unlikely.

In my adult life, generally unless I know the person well and depending on the person then as the saying goes “No glove, no love”

That’s not to say there have been times when its been forgotten.

Also got a packet of cigarettes in there that have lasted 15 yrs!” – Dom

“So…allow me to blush furiously for a moment.

I will come clean and admit that I was NOT safe sexually when I was growing up. Not at all. Then in high school, same story. And after that…when I first got online and was sexually frustrated beyond belief, but was finally given access to other cute boys like me that were looking to release some tension through a couple of clandestine meetings? I wasn’t safe then either. It is only by a stroke of extreme luck that my partners were all clean and I was able to come out of it all without catching anything. At the time, this didn’t bother me at all. But age and experience gives you perspective, and…even though I never had anything bad happen because of my reckless activity…I regret not being more careful in my younger days. Simply because of what COULD have happened. You know?

I was under the impression that I didn’t have anything to worry about. Nothing that a shower couldn’t solve. But I learned better later on. Thankfully, it wasn’t too late for me.

I realize that I write stories about teen boys who are sexually active, and that the idea of condoms don’t work their way into many of those stories. A majority of those stories. But these are fantasies, not real life. And I feel a duty to let the younger Shackers who read the site know that sexual safety is a real thing. And it should be taken seriously. So PLEASE…allow my past mistakes alert you guys to what might happen if you’re not careful.

People, these days, spend more time, more energy, and more money on protecting their computer from a deadly virus than they do protecting their own bodies. Please don’t. Laptops can be replaced. You can’t.

What I did was the equivalent of running through six lanes of heavy traffic with a blindfold on! Yes, I made it, safely, to the other side..but it’s not worth the risk. So be careful out there, k? I want you safe! Enjoy life, but don’t take risks when you don’t have to!” – Comicality