The comic book? “Alpha Flight #106”, a popular spin off the hugely successful “X-Men” series’. They were basically the Canadian version of the superhero mutant team.

But while the usual battles and conflicts ensued all around the group, this one held a little something that made it stand apart from what all the others were doing at that particular moment in time.

So what makes this comic book issue such a milestone for Marvel Comics? It’s because this was the first real ‘coming out’ of a superhero as a gay man. This is something that had never been done before in a comic book, but seeing as the “X-Men” has always been representative of those people who are feared and hated by society, facing prejudice and persecution simply because of the way they were born…what better place to introduce a homosexual character to the comic reading world?

Just one half of a set of mutant powered twins, ‘Northstar’, aka Jean-Paul Baubier, and his sister, ‘Aurora’, aka Jeanne-Marie Baubier, were two French Canadian heroes that quickly became beloved members of the Alpha Flight franchise once they were introduced. When combining their powers with a touch of their hands, Aurora and Northstar can trigger a very powerful ‘light force’ that they can use to blast enemies from a distance and cause serious damage to anyone who might want to go against them.

But…when Northstar came out as being gay in the comic books, talking about the emotional toll and raising awareness of the HIV virus…hardly any fans of the series batted an eye. And this was in the 90’s, during the height of the AIDS panic. It was a big deal. And another step closer towards more mature storyline in the stories that teens and young adults were reading.

Needless to say, it was a bit of a game changer. And it led to even more heroes being able to express their LGBTQ feelings in a responsible way that, eventually, didn’t come off as being all that controversial at all.

Of course…Northstar wasn’t able to actually have a male on male relationship depicted in the comics until YEARS later (including an actual gay wedding to his boyfriend, Kyle!), hehehe…but, you know…baby steps, right?

Ever since that one magic issue, Northstar has become a bit of a fan favorite among many gay teens, and continues to fight for what’s right in the pages of the Marvel comic book kingdom, never once censoring or hiding his homosexual nature. It’s really cool to see that people are growing up, and able to see that being gay is something that you do for kicks, but it is a valuable part of who you are. And if readers can believe in beings with superhuman abilities and cosmic adventures…then having a few of those amazing heroes being gay or lesbian or anywhere in between shouldn’t be that much of a stretch. Right? 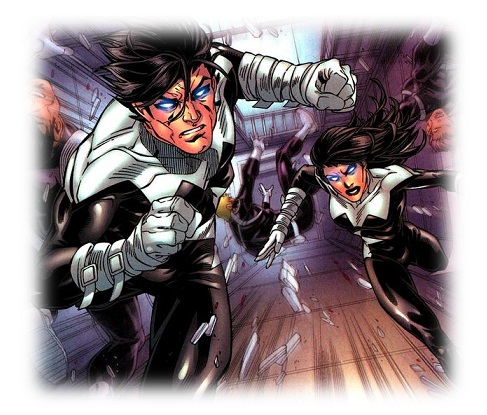 And don’t take Northstar’s sexuality as just a gimmick either. If villains have any plans of taking him or his sister for granted, they will be in a world of trouble!

In fact, Northstar, with his ability to fly at extremely high speeds, is actually one of the fastest characters in the entire Marvel Universe! He’s up there with Nova, Captain Marvel, Silver Surfer, and he can even rival the speeds of the X-Men/Avengers speedster, Quicksilver, himself. He’s definitely a force to be reckoned with. And he doesn’t necessarily have the kind of temperament to put up with a whole lot of bullshit!So…don’t piss him off! Hehehe!

This month in the new year, we give a well deserved salute to Northstar! Thanks for bringing a heroic vibe to the LGBT community, for inspiring others to do the same, and for letting young teens who might be reading that they’re not alone. That it’s ok to be who you are, through and through…and that you are capable of greatness.

Nothing says that we can’t have a little ‘fun’ with the character every now and then! ::Giggles::