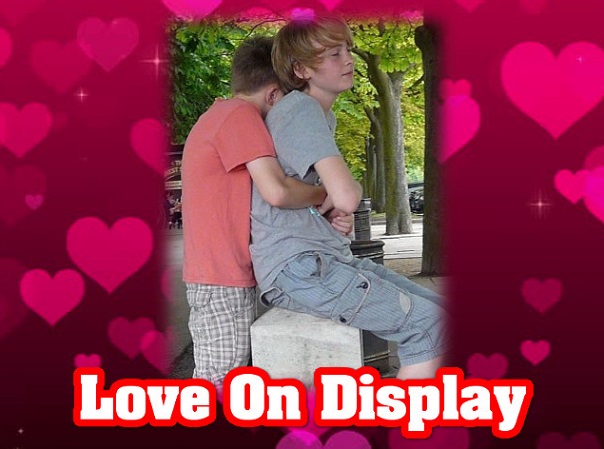 Public displays of affection! They can range anywhere from a hug, to a kiss on the cheek or the lips, or just holding hands. And then…hehehe, well, maybe some people get lost in the moment and start grinding on your living couch during a party! Hehehe, it happens! I’ve seen it!

So what are your thoughts on public displays of affection? Primarily in the LGBTQ community. Is it a moment of pride and sugary sweet feelings for all who witness it? Or does it make you uncomfortable? Maybe even jealous? If it was you, how would you feel about it? Do you feel comfortable making out in front of other people? If not…how come? And if so…how much is too much?

We’re talking public displays of affection here! Let us know your thoughts on this! Please don’t feel shy about putting your two cents in. Somebody out there might just need to hear what YOU have to say! So chime in when you get a chance! We’d love to hear from you!

“I don’t mind it, but I’ve never really been one to participate in it much.

Which is weird, because I am a diehard romantic at heart. I really am. And, sure, I don’t mind holding someone’s hand or giving them a little kiss in public. It’s sweet. But I’ve never been the type to go much further than that when other people are around. It’s like, “If we’re going to get into something ‘frisky’, let’s go somewhere private.” Hehehe! I mean, I don’t think people would want to see me and another boy pawing at one another as though we’re getting ready to strip down, bare assed, and give the rest of the world a show they’ll never forget.

So, I’m definitely a fan sweet displays of affection. But…please don’t shove your tongue down your boyfriend’s throat and grab his crotch in front of me. That’s just…it’s kind of obnoxious, in my opinion. There’s a line. One one side, you’re just showing your feelings for someone you truly and deeply care about. And there’s no shame in that. On the other side of that line…you’re either just trying to get attention, or you’re just being inconsiderate to the other people in the room. I think it comes off as rude.

Hehehe, if I wanted to grope and fondle my cute boyfriend, I wouldn’t have shown up to the party in the first place! LOL! We’d be naked some place going all the way instead of struggling to keep it legal enough to keep from being arrested for public indecency.” – Comicality

“My general thoughts on PDA’s is that they were nice and sweet and should be done when the moment feels right for both persons’ involved.

I’m not one to be comfortable as long as it’s tasteful (?) and isn’t done for the express purpose to make others uncomfortable. If you’re going for shock value rather than expressing your feelings towards your significant other, then you’re doing it for all the wrong reasons. That said, I have no problem holding hands, hugging, kissing above the neckline or other things you can do with your clothes on in public. I also have no problem with groping or tickling in certain circumstances where it may feel appropriate with the atmosphere you’re in.

What I think goes beyond good taste (good taste is different for everyone. check your local listings, your mileage may vary, objects in the mirror may be closer than they appear) is when it goes from flirty, affectionate touching to outright foreplay leading up to a quick run to the public bathroom for a hot two minute screw in the bathroom stall and one of you is trying to keep your legs above the partition because you don’t wanna be caught but it doesn’t matter anyway because you’re both giggling one second and moaning the next and you forget that sound carries and everyone else in the bathroom washing their hands can hear exactly what’s going on and a few minutes later, after you worked each other up into a frothing sexual beast it’s suddenly over and done with and you inevitably have to open the stall door and everyone’s looking at you funny. And then you look in the mirror and see that you have “DNA evidence” on your cheek and it doesn’t matter that you wipe it off, everyone in the bar watching you walk out knows exactly what just happened.

Point is, you do you (and do that hot guy in the bathroom if you get the chance). As long as you’re not breaking any laws, then just enjoy the moment.” – JDonley75

“I’ve seen people getting hot and heavy in the hallways at school, at the gas station, the beach, and even restaurants (I’m looking at you, McD’s). I think hugs, cuddling, quick kisses on the cheek or lips are fine. But anything heavier than a five-second kiss is pushing it into uncomfortable territory. On the street corner, at the movie theater, at Minerva’s Restaurant and Bar? What is WRONG with you? Nobody wants to see that, it’s just RUDE! Not to mention, distracting! Take it somewhere else! And that goes double for restaurants. When Will Smith filmed “Hitch”, he said that it was horrible to kiss Eva Mendes, because she’d just eaten her favorite sandwich to calm her nerves before the big kissing scene: tuna fish with extra onions, and crushed Doritos. Even after she used a WHOLE BOX of Altoids, it was still pretty nasty! Why would you DO THAT to another person; in public, no less?! Your significant other’s onion breath aside, there are other customers who might not appreciate seeing someone stick their tongue down another person’s throat. NO! The only place your tongue should be is on the food! And just because a movie theater is dark and most people are looking at the big, glowing screen, doesn’t mean that they can’t see you. There’s always one or two people who get bored during the slow parts of the movie, and then eyes start wandering….My point is, keep it rated G, please. For all our sakes.” – Page Scrawler

“Little gay kissey-smooches and hand holding are lovely to see and I see it a lot where I live. I often walk with my two friends who are engaged and they like to hold hands as they walk. When they are in less than accepting areas and do this unconsciously, I usually stare down the idiots who are giving them the stink-eye. Those people usually look away and go back to whatever they were doing after I give them my Ghost Rider Penance Stare long enough. I can be fairly intimidating when I want to be. So, there you can see my support for such displays. I will fight for them!

That said, I think it’s in bad taste to basically dry hump each another in full view of the public. Much like I don’t want to see it in straight couples, neither do I want to see such displays in public from gay couples. It is just in bad taste and exhibitionist, in my opinion. It is also meant to provoke which I think is foolish for anyone to do straight or gay. It does cause jealousy in people and reminds them of their loneliness. That would be my only reason for counseling against such overt sexual displays in public. It’s a general thing, not a gender normative thing.

I am learning to be more open publicly when I meet someone. It is hard for me to do because I’m such an Ice Queen and I lived so many years in a closet. I still am fighting a lot of my ‘Brandon’ hang-ups and hope for a day when the love I feel for someone can overcome the fear put into me so many years ago.” – MrM

“I can deal with others doing it but not me.

Sometimes people are over the top but generally its ok.

However for me personally I can’t do it. Not holding hands even.
I can just about do a peck on the check or a hello/goodbye hug but that’s it. I always think people are staring and judging especially as it would be a same sex couple.

That, and also as Com knows I am not great with any form of public display of emotions anyway. Still not figured out why yet!” – Dom

“I have done it. Mostly just holding hands and kissing, out in public, but most of the time it has just been in front of people I know.

Holding hands is usually fine, and maybe quick kisses. But as for frenching / snogging, I prefer a more private setting. Although when it has happened on occasion, I’m usually the one reciprocating, not the instigator.

I guess it depends on the context. Like how often, and if it’s just an ‘hello’ or ‘goodbye’ sort of thing.

It’s a little annoying when you’re with friends and they’re swapping spit most of the time. I think it’s pretty rude, to be honest. So I avoid doing it, myself.

I have gone much further in public, when I was young, and at parties. I was either too high or drunk to care. But I think I lacked some self-awareness back then, and was too intoxicated. I wouldn’t do the same thing now.” – Mike