Just a quick reminder! Brand new ebooks are now completed and ready to go! And there are many more to come in the near future! 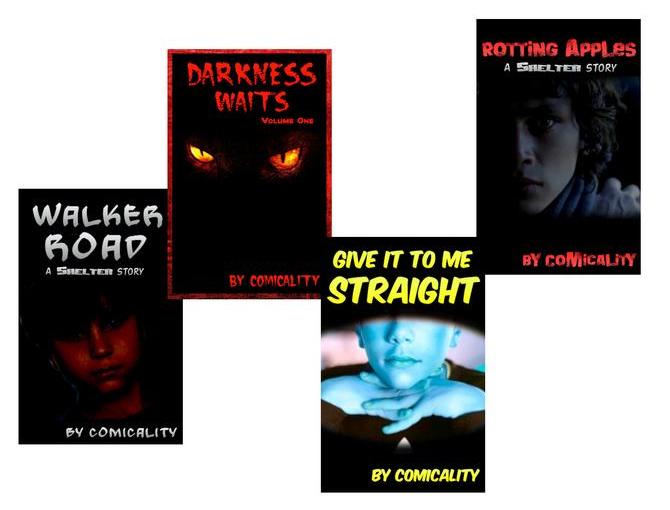 “Walker Road” – The very first tale in the “Shelter” prequel series, following a young boy’s journey out to a killer party to spend time with another boy that he has a huge crush on. Sneaking out of the house against his mother’s wishes, this may turn out to be one party that he will never forget! And you get to see just how quickly society can breakdown and be thrown into utter chaos! Hehehe, so…there’s that. Prepare for the zombie apocalypse, people! Because it isn’t just coming! It’s HERE!

“Darkness Waits” – A four part horror anthology that is an ebook exclusive! Stories of fear, death, monsters, and things that go bump in the night! All told with that familiar ‘Comsie flair’, of course! Hehehe! This is my first full blown horror attempt, and I was trying to see if I could come up with something new for each story, which is HARD to do! Sometimes it seems like every story has already been told. But I hope you all enjoy the different dark tales when you get the nerve. (“Peek”, “The Boy In The Rain”, “Baby Doll”, and “Todd And Jasper, Jasper And Todd”) Don’t worry, it’s just a story! I took it easy on you this time. Or did I? Volume Two coming soon! Sleep with the lights on! Because, in the end, Darkness waits for us all!

“Give It To Me Straight” – What started out as a short ‘Daydream’ story became an entire series in itself! All of the previous chapters can be found here in the pages of Imagine Magazine, and the next chapters (Seven, eight, and nine) will be posted in the July, August, and September, issues respectively. BUT…if you want to go ahead and read straight through to the end right now? The completed series is now available as an ebook! And no more waiting is necessary! So have fun! And thanks for the feedback, you guys!

“Rotting Apples” – This is the second spinoff in the “Shelter” series, now telling Donovan’s backstory, and detailing what happened and how he tried to survive the beginning of the end of civilization as we know it! I wasn’t going to post this until the 19th of this month, but I’m bringing it out a few days early! So if you want to see things from Donovan’s point of view, and learn more about him…this is the place to do it! Fans of the “Shelter” series might just be surprised by what they find there!

00
If you need some more stuff to read while on lockdown or under quarantine, just head on over to the…

[ [ [ CLICK HERE ] ] ]
0 0 0
Be the first to grab your copy today! Be sure to spread the word! And, if you can, please leave a comment or a star rating on Amazon to let people know what you thought! Make me look cool in front of the cooler kids, will ya??? Hehehe!
0 0 0
Every ebook purchased, every penny spent, helps to keep the site running! This is a big part of my bread and butter during the pandemic! And it makes me feel good! Hehehe! Ebook purchases ensures a perpetually cheerful Comsie, and that means more free stories and fun material for you guys on the site! So, consider it an act of kindness and an investment that will only end up benefiting you in the long run! Win/Win, right?
0 0 0
LOVE YOU ALL!!! MWAH!!!
0 0 0
Coming up next??? “Gone From Daylight: Foretold”, “The Secret Life Of Billy Chase Book Nine”, “Daydreams & Lullabyes: Volume Three”, and the “My Only Escape” series!!!