September! This summer was so lame. Has anyone else attended a video conference for a birthday party yet? It’s like watching one of those futuristic movies where people don’t directly interact with each other, ever. My drama class even does scene run throughs on Zoom. Did anyone see the reunion of “30 Rock” where most of it was acted out in a series of voice conferences? It was creative and funny and what we’re doing online makes me think of that show and how they safely got back together.

So we recently had a fun assignment where we needed to pick any costume that we have on hand and act like it was that character in the conference without any planning. We had a nun, the Sweedish Chef (so funny too), we had Freddy Krueger, two cops, a bunny, President Obama, and two Elvis… well one Elvis. When I realized someone else wore an Elvis costume, I switched off to being a bad Elvis impersonator who was convinced his impersonation was the best ever. It was a lot of fun. I showed the video to ACFan and of course, he wanted that on the cover. I don’t get how his brain works and I know Jeff thought he was purposely trying to mess with him cause, it has NOTHING to do with the cover he created. LOL! Your move Jeff!

So, I did want to remind some of you that my Mom reads the emails you send me before I get them. She won’t let me do this job unless she sees what’s going on. I’m only saying it because some of you (not mentioning any names) have gotten a little personal. I’ve seen some really awesome pics of some of you guys and some amazing photography that (seriously dude) should be submitted to the magazine. I’m just sayin! But there have been some (not many) that I have not been allowed to read because she said they cross the line. Be nice to my Mom guys, please. I don’t want to have to quit this job because it gets out of control or keeps upsetting my mother. That’s where “I” draw the line. Cool?

Kenny P. Writes: If you could snap your fingers and change something anywhere in the world what would it be?

Matt’s Reply: Change one thing… Hmmm… I think I’d like to snap my fingers and make everyone respect and care about how they affect other people. I’m so sick of watching people get all upset about how anything impacts just themselves and screw the next guy. It’s sad and it’s a huge part of so many of our current issues and has always been.

notsoepic15 Writes: Pop question, and you gotta be honest. What song are you listening to right now? I’m listening to “Playing On My Mind by The 1975”

Matt’s Reply: That’s a cool question! Right now I’m listening to “Ocean Eyes – Billie Eilish” which is a really pretty song. I’d actually just love to hang out with her, she seems really cool. Glad it wasn’t anything embarrassing… I usually just play a random mix of everything that I have ever given a thumbs up to. I have to have something playing when I’m doing site stuff 🙂

Dr.Pen15 Writes: shouldnt you be in school instead of doing all this prancing and posing crap??? its gay!!!

Matt’s Reply: Prancing and posing is gay? Wow dude! I guess it shouldn’t surprise me coming from someone who thought it was funny to sneak penis into his screen name. I do go to school. well, not right now I’m not exactly going but I do my classes online like lots of us do everywhere right now. While doing that, I’m making money and putting it in the bank for when I finish high school and get out of the Navy so my Mom won’t have to pay for college and maybe even help her with Preston’s education. Do you have a plan for when you aren’t judging people online while hiding behind your super clever screen name? It’s okay, I’ll wait while you figure it out. Wow. 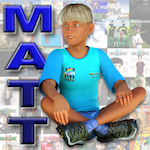 Contact Me:
Matt Scott
Public Relations Director and Former Mascot at Imagine Magazine
Matt is a treasured member of the Imagine Magazine family. Brought onboard on his 15th birthday, he became a junior editor and has since become the ambassador of our online home. Currently, he works in the background performing post-production duties when he can. He previously posed for a 3D render of his likeness monthly for each cover or for special events or articles.